Qatar Insurance Company (QIC) the leading insurer in Qatar and the Middle East North African region today announced strong financial results for the full year 2015, benefiting from the successful persification of the firm into more geographies and lines of business. Presided by Sheikh Khalid bin Mohammed bin Ali Al-Thani, Chairman of the Board and Managing Director of QIC, the Board of Directors approved the financial results at its meeting on 19 January 2016. 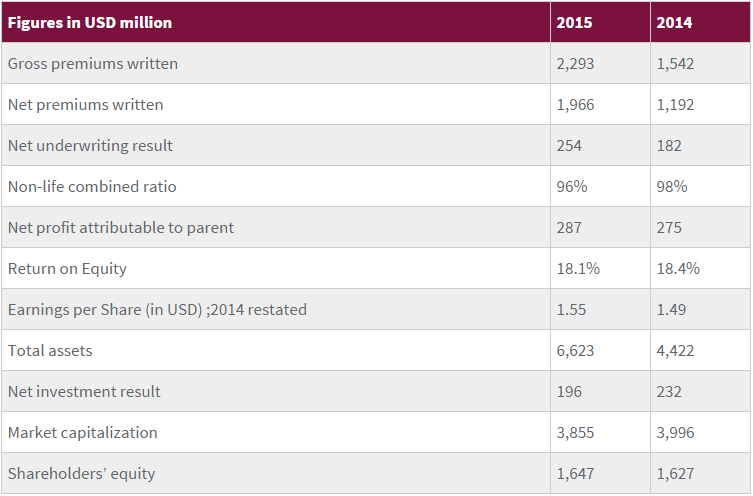 For the full year of 2015, QIC Group posted record Gross Written Premiums (GWP) of USD 2.3 billion, a strong growth of 49% on the previous year. Marine & Aviation, Property & Casualty and Life & Health premiums expanded by 2%, 63% and 31%, respectively. Reinsurance premiums, generated through QIC’s dedicated global reinsurance subsidiary Qatar Re, grew at a rate of 116%, now accounting for 50% of the group’s total premium income.

QIC Group’s consolidated net profit for the full year 2015 came in at USD 292 million, compared to USD 282 million for the same period last year. Profit growth fell short of premium growth as a result of regional economic and investment headwinds due to lower oil prices and continued softening of global reinsurance and specialty insurance markets. Against the backdrop of growing regional and global financial market volatility, the group’s net investment result came in at USD 196 million. This was partially offset by a very strong net underwriting result of USD 254 million, a significant increase of 39% on the previous year.

QIC’s overall profitability also benefited from the Group’s continued cost discipline. As a result, the Group’s administrative expense ratio for its core operations declined from 16% in 2014 to 12% in 2015. The overall non-life combined ratio improved to 96%, from 98% in 2014.

Return on Equity for the reporting period came in at 18.1%, against 18.4% in the previous year. This result compares favorably with both QIC’s regional peers as well as persified international insurance and reinsurance groups. At 31 December 2015, QIC Group’s shareholders’ equity stood at USD 1.65 billion, slightly up from USD 1.63 billion at the end of 2014.

Mr. Khalifa Al Subaey, Group President & CEO of QIC Group stated, “2015 was a challenging year for Middle Eastern and a number of global investment markets. On the back of our excellent geographical product persification with sustained profitability of our insurance and reinsurance book, we have proven our resilience, successfully navigating the turbulent waters in 2015. Buoyant personal lines markets in the Middle East and a rapid expansion into global specialty (re)insurance markets in particular have offset the impact of the increased volatility in equity and fixed-income markets.”

2015 was marked by a sustained pace of the Group’s international expansion. 67% of its overall gross written premiums are now sourced through its international operations in Zurich, Bermuda, London and Malta.

The Group’s reinsurance subsidiary, Qatar Re, ranked amongst the global Top 50 reinsurers, continued to expand its global operating platform by opening a branch in the Dubai International Financial Centre and a representative office in Singapore. In addition, the company redomiciled to Bermuda and is now licensed as a class 4 reinsurer, benefiting from the jurisdiction’s Solvency II equivalency, a closer proximity to the US, the world’s largest insurance market, and improved capital efficiency.

Antares, the specialist Lloyd’s insurance and reinsurance group which QIC acquired in 2014 continued to broaden its global footprint by establishing a dedicated platform at Lloyd’s Asia in Singapore. In addition, Antares Lloyd’s Syndicate 1274 launched its new Property Direct & Facultative pision.

Another milestone in 2015 was the establishment of a retail insurance operation in the UAE and in the State of Kuwait drawing on years of experience with corporate clients in the respective countries. QIC has started making personal insurance products directly available to inpidual customers under the theme ‘Global Insurance – Local Assurance’. The offering includes a unique online platform, whereby customers can buy or manage their personal insurances (car, home, travel) from anywhere, at any time.

Sheikh Khalid bin Mohammed bin Ali Al-Thani, Chairman of the Board and Managing Director of QIC, said, “We are cautiously optimistic about our outlook for 2016. With renewed focus on international expansion in areas of high potential, we aspire to be ranked amongst the Global Top 50 insurance groups by 2030.”

QIC introduces Off Road 360 at the Qatar Motor Show